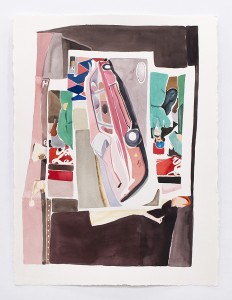 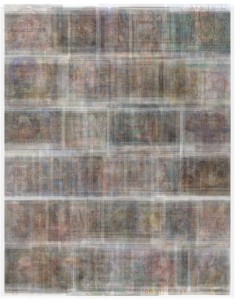 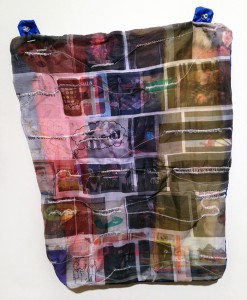 “The Menagerie” presents a selection of works taken from my ongoing Search Engine Project that has persisted over the last three years.  Initially I was interested in how commonplace Google Image Search has become and how it is utilized in everyday life. The project began by conducting a series of image queries using the phrase “no comment”. I chose this phrase for its ambiguous meaning and for the potential variation within the query.

The search engine also became a place for aesthetic inquiry. The formal display of Google Image Search is gridded in such a way as to be reminiscent of Modernist painting and architecture. Relationships between images are coalesced through formal devices such as resizing and containment. The viewer is left to have a fluid and cohesive aesthetic experience, via unitization of disparate images, although the viewer’s sense of scale and resolution (quality) of these images is always indeterminate.

The two large paintings in the exhibition pay tribute to this formal display. Over the years Google has added further customization features to its image search. One of the more recent features is a time-based search. For seven days I tracked both the 24-hour image search query and the default search query. These two paintings used the first “page” of results as a formal mapping. Each image was reduced to a rectangular block of color that was dictated by the most dominant color found within the image.

The varied material investigations employed attempt to mimic common digital image manipulations, such as applying filters, superimposing and skewing. The resultant physical manifestations investigate how the display of the search engine, as well as the images themselves, operate when placed into the physical realm.

The Stilllife works on paper began by printing the query images at their actual size rather than their display size. These image prints were mounted to individually cut pieces of foam-core that correspond to their print size. The digital images thus become transformed into literal building blocks that can be physically rearranged. I assembled these image-objects into stacks, which then served as a still life to paint from.

The query images are at times printed onto different types of fabric and either stretched over an armature or allowed to embrace the sag of that particular fabric. The Search Engine Nightlights are paintings comprised of stretched digital prints on fabric and many layers of mark-making, which create a literal physical thickness. In order to see the previous underlying layers the paintings must be illuminated from the backend. Baggage is comprised of ten enclosed cotton voile pouches. The images were first digitally superimposed and printed onto transparent fabric. These pieces are deflated shells; the surface image now a transparent flaccid skin lacking a skeletal structure.