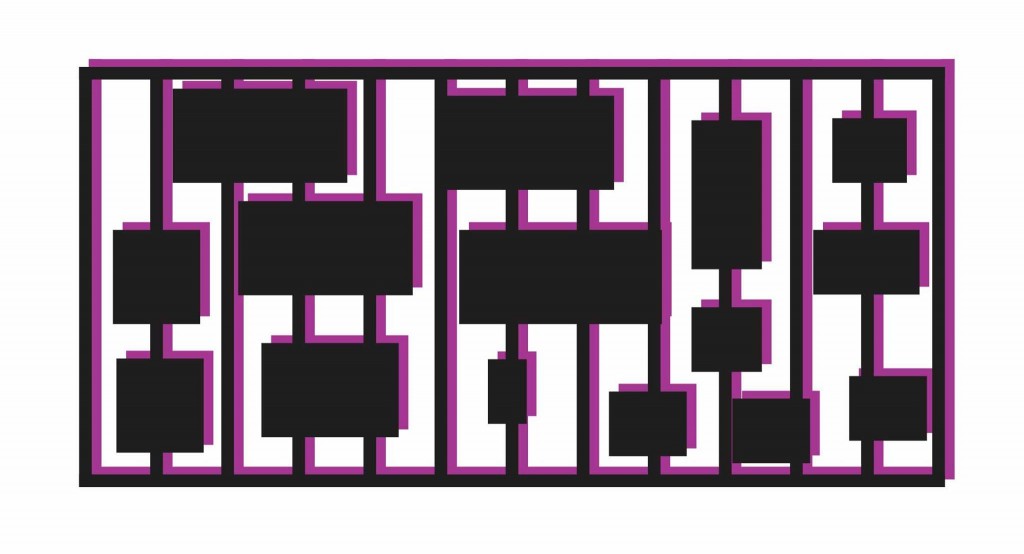 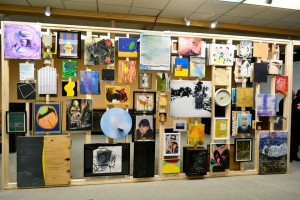 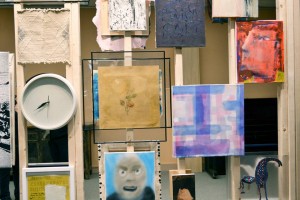 Heralding the New Year is “PAINTINGWALL (Janus at 8:16),” a group show of paintings on a purpose-built central wooden wall, eight by sixteen feet, named, like the month of January, after the two-faced Roman god Janus. Each artist has contributed an even number of pieces—either two or four—to the wall, one or two on each side, back-to-back like those fabled godheads. To travel on foot around this wall is to embody Janus: As one walks around the wall, seeing first one side and then the other, one must use one’s figurative “second head,” looking back into memory, to recall the first works seen as the second ones come into view.

Janus, Roman god of beginnings, doors, gates, passages, transitions, endings, and time, was evoked at the beginning of most Roman ceremonies, regardless of the main deity to be honored. How fitting, then, to evoke Janus’ myth at the beginning of this year, during his namesake month, at the site of a wall, connoting Ianus geminus. The shrine, when closed during times of peace, formed a walled enclosure with gates at each end. Rarely, however, were the gates closed during the reign of the Roman Empire. Equally, the effect of this wall of paintings, though tranquil, is confrontational: to construct such a wall is to deny the existing white cube of the gallery space as structural support for the creative process.

Heightening this effect, the walls of the gallery itself are empty, numbered only with their dimensions in small black lettering on the center of each. Further, the wall of paintings is angled as such that the works cannot be seen through the gallery’s windows from outside, denying voyeurism. Indeed, the entire relationship between viewer and work is inverted; the paintings, crowded together in the center of the space, look back at the space, toward the white cube as well as the viewer, who is silhouetted against the empty walls.

Adding to this come-together effect is the lack of wall text for each work; though the works are from studios around the world (as near as Brooklyn and as far as Iran), in media as diverse as linen, yarn, bleach, oil, pastel, burnt canvas, glue, cement, sawdust, and clocks (moving anti-clockwise), and featuring imagery from angry Persian birds to pixels, roses to bees, snowflakes to sex, they gather anonymously; a faceless crowd of resistance.

The “PAINTINGWALL,” then, becomes its own entity, a roaming group show that points out the white cube as a site itself, a now-ubiquitous artworld structure initially created to negate site. As the wall could travel, moving in and out of different contexts, it no longer strictly needs the gallery space in order to function. “PAINTINGWALL” stands up for itself.

Chloé Rossetti is a New York-based artist, writer and filmmaker, a regular contributor to Artforum.com and The Brooklyn Rail.