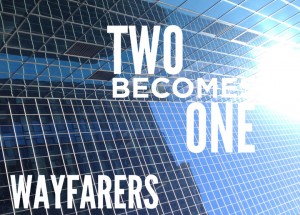 An Opening Reception for Two Become One will be held July 15th from 6pm-9pm, and the work will be on display until August 5th.

Two Become One is a group exhibition from the RISD MFA program in Painting being exhibited at Wayfarers, Brooklyn. Nine artists have been gathered to present the textured landscape that snakes up and down the 2nd and 3rd floor stairwells of 62 Prospect Street in Providence.

The show opens with a wall-sized video projection of a landscape folding in upon itself by Lauren Comito. The immediate sensation is similar to what one imagines it would have been like to sit in the front row during the famous “stargate sequence” that ends Stanley Kubrick’s 2001: A Space Odyssey. As the collision fades, five clones of artist and celebrity impersonator Claudia Bitran emerge, and without backing music, provide a hypnotic serenade drawing you further into the dark.

Much of the work feels site-specific like that of Rachel Grobstein, Zach Seeger and Joe Bochynski. Bochynski has cut a hole in the whispering wall and embedded a digital parasite that draws its power from the gallery wiring. Grobstein lights a delicate mirage of paper tricycles that have been swept into a corner like a tumbleweed. Seeger’s richly decorated canvases are broken and bound together making figures that remind one of the battered scarecrows of the original Planet of the Apes, which stand just at the edge of the Forbidden Zone.

The painting of Taniya Vaidya is being dissected alongside the mechanically liquid surfaces of Wally Dion. Both artists listen intently as their mediums and surfaces react to each other. Vaidaya’s ink patterns bleed into fabric an organic logic of its own. A fact which she credits to the fabric graciously, with a smile. Meanwhile, Dion is interested abstracting his own direct contribution so much that he’s recently begun experimenting with simple machines, which he hopes, one day, produce their own signature forms.

All of the artists in the show push their subjects through an array of displays to produce entire systems of image making. They document these systems and display them in their studios to visually quantify and further prove their methods. The paintings and video of J.J. Frioux, illustrate how subjects such as landscape and identity can be mutated by such a process. As you exit, the wooden space created for Doug Burns displays the byproducts of experiments. Burns practices spontaneous collage and improvisation while restricting himself to a very limited palette of materials. He is waiting for a mythology to emerge.

What does emerge from Two become One are distinct patterns of process and material. “In an emergent system complexity can arise out of a multiplicity of relatively simple interactions.”

Two becomes One was curated by Wayfarers’ board members Joshua R. Edwards and Jesse James Arnold. Special thanks to Zach Seeger, whose breakfast burritos changed our lives.